Warning: The reader is cautioned not to make comparisons of the consequences of composite failures in aircraft with that of boats. The purpose of this discussion is to reveal that even in the world of really big money, the experts are still having trouble with composites in what amounts to life and death situations

At 35,000 feet above the Caribbean, Air Transat flight 961 was heading home to Quebec with 270 passengers and crew. At 3.45 pm last Sunday, the pilot noticed something very unusual. His Airbus A310's rudder - a structure 28 feet high - had fallen off and tumbled into the sea. In the world of aviation, the shock waves have yet to subside.

One former Airbus pilot, who now flies Boeings for a major US airline, told The Observer : 'This just isn't supposed to happen. No one I know has ever seen an airliner's rudder disintegrate like that. It raises worrying questions about the materials and build of the aircraft, and about its maintenance and inspection regime.

This is not the only Airbus to experience rudder failure. On November 2001, 265 people died when American Airlines flight 587, an Airbus A300 model which is almost identical to the A310, crashed shortly after take-off from JFK airport in New York. In that case the NTSB blamed pilot error for the fact that the rudder fell off, a ruling that was greeted by much incredulousness. 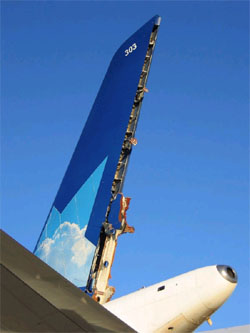 It's not often a journalist gets a technical story correct, but this one seems to have hit the nail on the head. Continuing from the same article:

Like earlier Airbus models, this relies heavily on 'composite' synthetic materials which are both lighter - and, in theory, stronger - than aluminum or steel. Fins, flaps and rudders are made of a similar composite on the A300 and A310, of which there are about 800 in service all over the world.

Composites are made of hundreds of layers of carbon fibre sheeting stuck together with epoxy resin. Each layer is only strong along the grain of the fibre. Aircraft engineers need to work out from which directions loads will come, then lay the sheets in a complex, criss-cross pattern. If they get this wrong, a big or unexpected load might cause a plane part to fail.

The point to be made here is that aircraft have had rudders made of aluminum for 70 years with no problems. Now come our wonderful "hi tech composites" and people are dying as a result. Look at the remnants of that rudder. The laminate skins are incredibly thin over an unidentified core. The means of attachment is rivets and when scaling the thickness to the size of the rivet head, I would judge the skin to be no more than 2-3 mm. That is some real flimsy construction. Do those rivets go through the core? Sure looks like it.

Now look at the gunk or sludge appearing around the inside rivet heads in the plates toward the top, denoted by red arrows. Hard to be sure but it sure looks like a liquid was seeping out around the rivet heads for a long time. I don't know what kind of core this is, but look at the brown leakage trail running down the left inner side of the rudder remains. This looks awfully similar to the boat core problems we know so much about. But to see this sort of thing on a 500 mph jetliner is frightening. 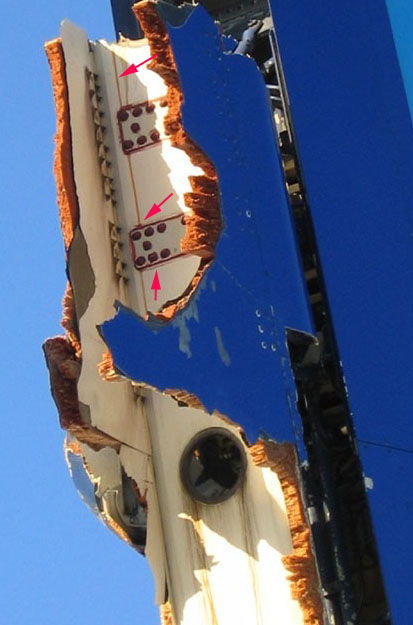 The NTSB blamed the flight 587 crash on pilot error and "aggressive rudder inputs." This is a dubious conclusion disputed by many experts because that aircraft was just taking off and going at low speed so the stress was reduced. It's like blaming a car crash on the driver hitting the brakes too hard. Since when don't flight controls withstand "aggressive inputs"? They are supposed to be able to withstand this very thing. This is why nobody believes the NTSB anymore and why many astute observers, including pilots, believe that this agency is in the business of cover up - just the continuing saga that started with TWA 800. In answer I'd point to my article on the "El Toro" incident which shows up more NTSB incompetence.

In 2002 a Fed-Ex A300 cargo plane also experienced the loss of a rudder. In FedEx's own test on the rudder on the ground, engineers claimed the actuators, the hydraulic system which actuates the rudder, tore a large hole around the hinges, in exactly the spot where the rudders of both flight 961 and flight 587 parted company from the rest of the aircraft. The hinges, eh? Apparently that means the exact spot we are looking at in our photo here.

Professor James Williams of the Massachusetts Institute of Technology, a composites expert, suggests that repeated journeys to and from the sub-zero temperatures found at cruising altitude causes a build-up of condensation inside composites, and separation of the carbon fibre layers as this moisture freezes and thaws. According to Williams, "like a pothole in a roadway in winter, over time these gaps may grow".

Gee, you mean that's why we see those brown water stains and gook around the rivet heads? But get this: Commenting on the vanishing rudder on flight 961, he pointed out that nothing was said about composite inspection in the NTSB's report on flight 587. This was an "unfortunate calamity", he said.

That's par for the NTSB. In the Flight 587 crash, it was determined that the whole tail (vertical stabilizer) had come off. Low and behold, that entire assembly is also composite. The following is from FAA airworthiness directive RIN 2120-AA64:

The FAA considers that, before structural failure, it may be possible to detect indications of possible failure modes that could result in separation of the vertical stabilizer from the airplane. These indications include edge delaminations, cracked paint, surface distortions, other surface damage, and failure of the transverse (side) load fittings. Similarly, indications of failure of the rudder assembly, which could lead to failure of the vertical stabilizer, may also be detectable with such an inspection. Although neither the FAA nor the NTSB have reached conclusions with respect to these possible failures on the accident airplane . . . .

Damage of the composite areas includes delamination; distorted surfaces that may indicate delamination; cracks in the paint surface; evidence of moisture damage; [emphasis added] and cracked, splitting, or frayed fibers. This AD also requires that operators report results of inspection findings to the FAA.

Regrettably the FAA did not make any comment about the safety of the use of these materials for this application. However, based on that single photo alone I can come up with some valid (thought not proven) theories of why the failure occurred, for we have many of the same problems in boat building.

A maintenance engineer at JFK following the 587 crash make the following statement,

We didn't think a lot of it at the time, but every time we did an "A" Check at JFK (approx monthly), we drained massive amounts of water from the tail of the Aircraft, water that had been trapped in there all this time and freezing and thawing out regularly.

First it is important to understand that aircraft go through intense temperature changes, freeze and thaw cycles. We also need to appreciate how much water an aircraft encounters. Clouds are water, both liquid and frozen, plus aircraft parts are heavily subject to extreme condensation; think, contrails! Yet another stress factor is vibration, particularly in something like a rudder. The attachments of both rudder to tail and tail to fuselage are by means of metal mechanical fasteners and fastening to a composite is always a difficult proposition. If you look at the photo of the tail section, you see that there are numerous cracks in the shape of large rectangles. The graphic there is a thin plastic laminate stick-on and the cracks are showing through it, but do not show up in the blue painted areas. The suggestion is that the plastic graphic is showing up some kind of underlying problem with the tail structure, though this is far from certain. Could it be the water the engineer was referring to above? Another engineer says:

The more common damage caused by water contamination is in the laminate itself, where minute fractures allow water to soak into the matrix/fibres causing such cracks to propagate with cold-soak cycles. This can lead to localized delamination, especially where laminate/core/laminate sandwich structures are concerned. Such damage can affect the stability of the surface under compression, thereby affecting the structural integrity of the 'box' structure as a whole." But then he says, "Before we blame composites or Airbus design, we should take a moment to put these relative facts into perspective."

Okay, yes, but . . . would this event have happened if the structure were made of aluminum, all things being equal? I think not. Military aircraft are having many problems with composite control surfaces, particularly as respects water, but they resolve it by frequent inspection and replacements at very high cost.

The entire composite tail, being less stiff, is subject to more bending and tails bend a lot whereas aluminum tails are much stiffer and we don't have metal tails and rudders falling off. Bending will stress the rudder hinges which are the weak point on the rudder. Most likely what we are looking at here is water/freeze/thaw cycle induced failure in combination with a relatively weak composite structure. All things being equal, had this tail-rudder assembly been aluminum the failure would not have occurred. 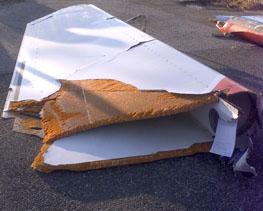 I just found a photo of the rudder of Flight 587. Just look at the thickness of the skin. What would cause any engineer to believe that that is adequate? Of course it would blow apart if you pushed the rudder pedal too hard!

All of which reminds to make sure to book my flights only on Boeing aircraft. They don't use composite control surfaces. At least not yet.