And Why New Boat Surveys are Becoming a Necessity.

Putting cores in boat structures is now THE thing to do. Almost all late model boats we run into have more and more coring. Decks, hull sides, bottoms. Which leads me to wonder if boat builders know why they're doing this and what the potential consequences for their future reputation is.

Builders are coring everything because their cost analysis suggests that using a lot of foam is cheaper than very high cost plastic resin, particularly the vinylesters and orthos that are needed on bottoms to avoid blistering. After all, cores make structures stronger, right?

Only if you know what you're doing, and what we've been seeing lately strongly suggests that a lot of builders don't. They think they do, they'll tell you that they do, but their products say otherwise. For example, we all know that if you allow water to get into a balsa core, you end up with a big problem. The solution: use foam instead of balsa. It's impervious to water. Or at least they think it is.

The fact is that most polyester based foams are not impervious to water any more than orthopthalic polyester resins are (the resin type most prone to blistering). When immersed in water long term, most poly foams will break down and the styrene separates out in the same manner as hull blistering. Most of the wet foam cores we've looked at reek of styrene just like blister fluid does.

In our view, the jury is still out on where this widespread use of foams cores is leading us, mainly because extensive use of the material hasn't been around long enough for us to get a good handle on how well these structures will hold up. One thing we do know for sure, and this is that builders are taking a much more cavalier attitude toward the way they handle foam cored structures.

We've assembled a collection of photos here to evidence our point that builders do not seem to think that they have to handle these structures with any high degree of care. Here we see builders drilling holes and running bolts and fasteners into cores with no concern whatsoever for water leakage. No caulking necessary. 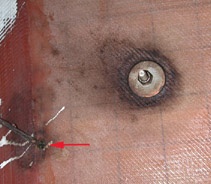 The photo at left is the underside of a cockpit deck showing the bolts used to attach cockpit seating modules. Virtually no caulking was used and the bolts are obviously leaking water not only into the core, but right through the deck. The red arrow at left points to where they simply drilled a hole through the cored deck to run a wire for foot lights. This boat is less than two years old, so whatever the effects of water into the core are as yet unknown.

If this cavalier handling of cores is bad, the next example shows that it can get a lot worse. The "it" in this case is the builders' degree of knowledge (or worse, his lack of concern). The majority of cored structures we are seeing on new boats has only ONE layer of glass laminate on the inside or underside of the structure, be it a hull, deck, whatever. Needless to say that when you attach a load bearing piece of hardware as we exemplified in the photo below, this isn't going to work out so well. 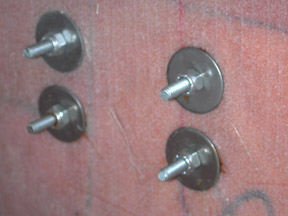 This, believe it or not, is a bow cleat bolted directly through a foam cored deck with only washers backing it up on the under side. Obviously, it would only take a modest load on these cleats to end up crushing the core. 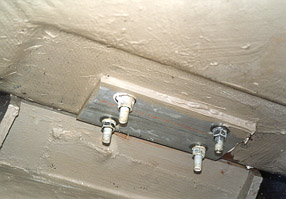 The left photo shows how it should be done, but this takes a little bit of extra work and planning. Notice here that there is no core in way of the area in which the cleat is mounted. If there is no core, then no water can get into the core, nor is it possible for a heavy load to crush the non existent core. Note also the aluminum back up plate under the cleat, even though it's attached to solid glass.

What is shown here is the difference between a boat builder that knows what he's doing (or cares) and one that doesn't. 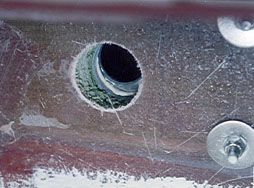 In yet another instance, a dealer installs an anchor winch. All he sees as being necessary is to drill a few holes and bolt it on -- through a foam cored deck. Just about anyone can figure that a winch is going to be very heavily loaded, but not this dealer. He just bolts it on with a few small washers under the nuts, and doesn't even bother to seal up the large hawse hole he drilled through the deck. This is a new installation depicted here, so the problem is yet to manifest itself.

The next example comes from a boat that is not new, and the extent of the problem of water into the core has become very obvious. Here's another hole in a foam cored deck that allows a huge amount of water to come through, as you can see by the wetness. While we do not know what the black gook is weeping out of that hole, we can only presume that there is some sort of water reaction with the material. 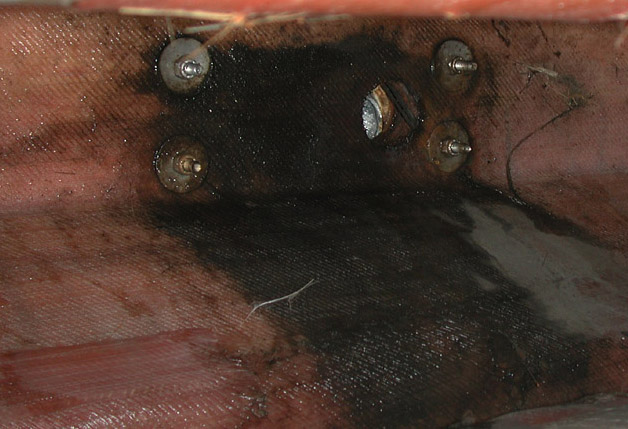 And then there is the case of the new $750,000 fifty foot cruiser by a popular builder. This boat has a cored bottom, but the buyer wisely hired us to check it out before he handed over his money. The photos below show what we found. 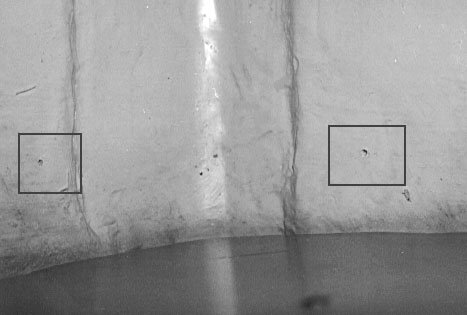 Shown above is the bilge area where two 1/4" holes were drilled through the inner laminate on the bottom of the cored hull. Why these holes were here is anyone's guess, but had we not found them, the core of this hull would surely have filled up with water.

The only good news to come of things like this is that by getting  a new boat thoroughly checked out prior to purchase, most such problems can be found and corrected. Our new boat inspection program is designed to find an locate such deficiencies so that the problems can be fixed at the builder's expense, not yours, and so that you won't be facing a big surprise when it comes time to sell your boat when a surveyor comes along and says. "Mr. Boatowner, you have a problem."