One of my previous articles appearing in NAMS News, New Construction Materials: How to Avoid Being Blamed for Someone Else's Mistakes, evoked some rather hostile and predictable reactions. One respondent, apparently preferring anonymity, sent me an E-mail message declaring me a horse's ass and an ignoramus for pointing out some of the weaknesses of foam core construction.

It seems the gentleman owns a foam cored boat himself without nary a problem. As a skeptic of foam cores, its been lonely out here over the years in face of so much promotion and fanfare for the material. However, he overlooked the point that I never said that foam couldn't be used successfully; it can and it is.

However, I confess to feeling somewhat vindicated when, a few days later I ran across an editorial in Professional Boat Building by Henry Elliot, a composites consultant out of Swansea, Massachusetts. Mr. Elliot points up the debates ongoing in the U.K., Sweden, Italy, New Zealand and Austrailia about the International Measurement System for racing sailboats that apparently prohibits honeycomb cores and more or less mandates cross-linked PVC. Without being specific, he alludes to some large scale disasters with the material.

Below: Typical core bonding failure. In this case, due to failure to achieve bonding during construction. Here, the cut away section exposing the core shows that there never was bonding to the outer skin. Also points out that PVC becomes unstable at increasing temperatures, as well as pointing out the rather limited lab testing of such laminates, a point that I have repeatedly made. He comments briefly that testing small coupons or small pieces of laminate does not produce the same results as testing a large panel.

Indeed, in all of the test data that I have seen, I've never run across tests of large panels or complex panel shapes such found in boat hulls. Even a non-PHd engineer like myself understands that one-dimensional testing yields only one-dimensional results. Yet even he overlooks the effect of shape on cored parts or hulls, a factor as large as any, and one that is routinely ignored.

To explain briefly, curved and flat cored panels behave in vastly different ways when stressed, depending upon size and shape. One of the reasons that so much delamination of foam cored hulls has occurred (far more with sail than power boats) is due to the fact that a thick cored laminate has a sizable difference in the radius between inner and outer laminate.

Like two cars going around the inside and outside turns of a race track, one has to go faster than the other because it is traveling a longer distance. A similar thing happens when a cored panel bends: the inner and outer panels do not bend at the same rate. This causes a shearing action against the core that often results in bond failure. Failures in sail boat hulls occur most often because of the hourglass shape with a strong double radius, whereas powerboat hulls are mostly flat.

I have long criticized vendors of these products for not supplying adequate test data, or merely selective specifications that put their products in the best light. On the other hand, boat builders have an obligation not rely on salesmen for their knowledge, but to acquire their own knowledge of materials.

In the meantime, Mr. Elliot says that we (its not indicated who "we" is) need to acknowledge what we don't know. "Designers and vendors have to recognize that laminate and process information generated in the lab often has little connection to what is achievable on the shop floor."

Precisely. Not because accurate data can't be obtained in the lab, but because so much of the lab testing that is done is based on a faulty premise. Dropping a heavy ball on a coupon suspended between two uprights - which is the sort of data we most often see - constitutes nothing more than an impact test of a coupon. It hardly approximates the actual stresses imposed on a boat hull, or even a section of a hull. Is this test supposed to approximate the stresses induced when a twenty ton hull slams into a wave? Or falls off a wave? 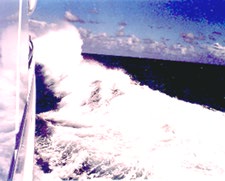 There's a vast difference between lab testing and conditions like these. Here the author sea trials a 115' Crescent motor yacht in 6' seas at full speed. Meeting a wall of water at 20 knots is a more realistic method of load testing. The hull is sounded out after the sea trial to check for evidence of delamination. See additional note below.

Yet that is precisely what a marketing demo tape that I recently received from a supposedly independent lab would have me believe about the promotion of a new product.

In this instance, dropping a shaft of steel on the coupon was supposed to convince me of the strength of a composite when applied to an entire hull. Most of this sort of so-called data appears to be little more than self-serving promotion. A few of the tests that are usually lacking are those that determine cleavage strength, i.e., the strength at which the foam bonds to plastic resin; shear strength; effects of temperature, and a host of shaped and flat panel stress tests.

Despite my disdain for the material, even the weakest foams can be used successfully when a structure is properly designed. But proper design requires a tradeoff in terms of detailing that raises labor costs, a tradeoff that most builders are not willing to accept. And so the failures continue.

Proper testing of materials and design need not be either particularly expensive or difficult. Anyone with the most rudimentary engineering knowledge could do it. But it does require a variety of tests on appropriately large structural sections of a size commensurate with differing hull shapes, whether on a scale models or a manufactured cross section of panels. Unfortunately, the people promoting these products and processes show little interest in producing reliable data and so the failures and disasters continue.

As I pointed out in my last article, recent hurricanes have put thousands of hulls to some of the most rigorous tests imaginable, at a cost of millions. I took this opportunity to compare hundreds of boats with varying construction materials and methods, and just from a cursory examination it was not difficult to discern which materials and designs fared the best under catastrophic conditions.

The proper means and methods of testing are known. We already know most of what we need to know, its just a question of whether those who design, manufacture and apply those products choose to make proper use of that knowledge. The evidence shows that far to many don't.

In the meantime, its the role of the marine surveyor to serve as the fourth estate of the boating industry by making sure that we are fully up to date on our methods of surveying and ensuring that our clients don't become the victims of ignorance - ours or anyone else's.

We recently completed the survey of a 115' fiberglass yacht built by Crescent Boat builders of Vancouver for a longtime client. This yacht utilized a double layer of Airex with solid laminate in between. With two surveyors on the job, we went over this hull with a fine tooth comb and several heavy hammers and gave her a thumbs up. The reason we did so, despite the extensive history of problems with fully cored hulls, was the exceptionally good attention to detail that we found throughout the hull. Just from observing how she was framed out, we could tell that the designers and builders knew what they were doing. And because they understood the weaknesses of the material, they also understood how to use it. We did not find a single area of incomplete bonding or bonding failure. And this, on a 115' hand laid hull.