(Widely circulated photos are incorporated in the text. - See update below.)

Note on Sinking of Bertram 63 "Absolutely"

Recently someone posted numerous pictures of a massive hull failure occurring on a 2008*, 63′ Bertram SF named CERTIFIABLE out of Palm Beach. These can be seen at http://www.thehulltruth.com/forums/thread-view.asp?tid=229966&start=1 in the Boating and Outdoors Photos under the post “Ugly.” The photos are large and so we can do a little trouble-shooting to try to ferret out what went wrong. We did not see the vessel personally and the following is gleaned solely on those photos, but we have seen many similar failures.

This failure involved an area of laminate failure on the port side and bottom along a length of about ten feet where the outer skin came off the core. The incident reportedly occurred in fair weather and the yacht made it back to port without sinking. Much of the core is exposed, unfortunately for Bertram, since we can get a good idea of what happened and why. 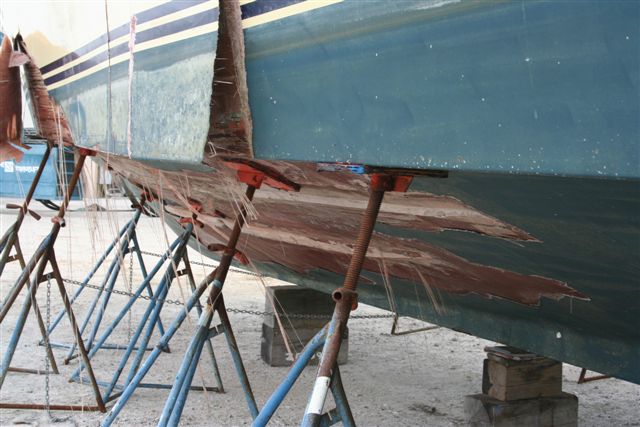 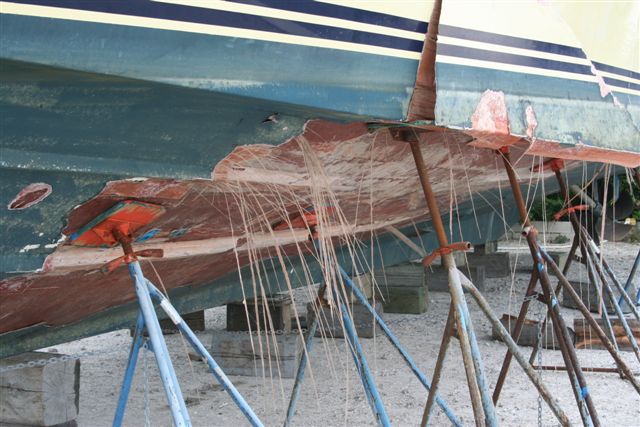 We do not know if this hull is vacuum bagged, but massive failures like this are not uncommon and I’ve seen lots of them. They have become increasingly common with vacuum bagged hulls for reasons that would be obvious to anyone who has watched the process. It is difficult and fraught with potential for error. Even worse, the errors get built-in without a visual chance to correct them as you would with a hand lay up. If this was a hand laid hull, then what we see there is just really shoddy workmanship. The outer skin failure is inexcusable because they applied the second layer far too late to get a decent bond. We suspect they did this to avoid print-through and thus sacrificed strength for appearance sake. Gel coat/skin failures have become very common for this reason.

What is most odd to me is that there are a number of failures. The first is what looks like a secondary bond failure in what should be a primary bond. Secondary bond failures resulting in the outer skin peeling off has become very common, most likely due the fact that in the vacuum lay up process, the gel coat and skinout layer are laid in before the remaining plies, core and bagging. This is where the very weak secondary bond occurs and is purely mechanical, not chemical, like multiple coats of paint. 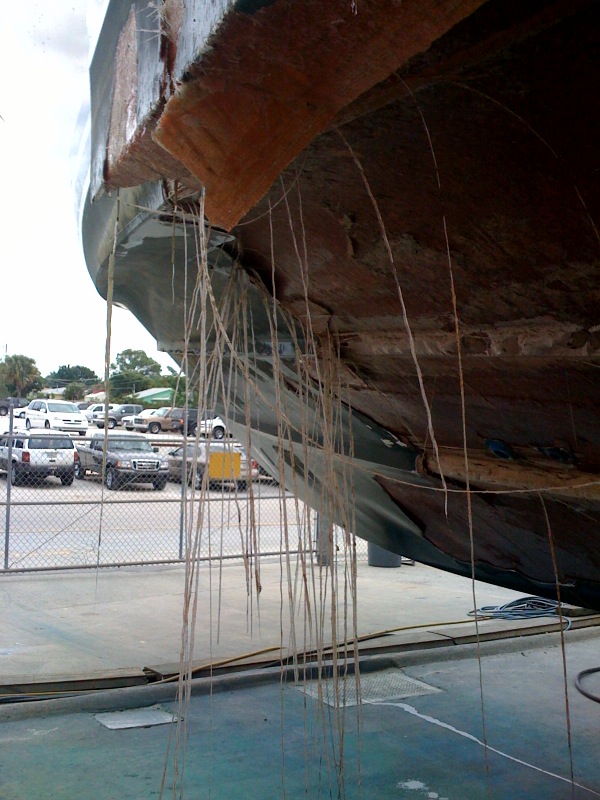 The photos are good enough that we can see major faults in the core installation, along with major outer skin failure of what looks to be two layers unidirectional fabric running fore n aft. No bias in any of the fabric, just all going the same direction. Is that good engineering? Don’t think so. Running all the fibers in one direction leaves the other axis totally vulnerable to stress loading. 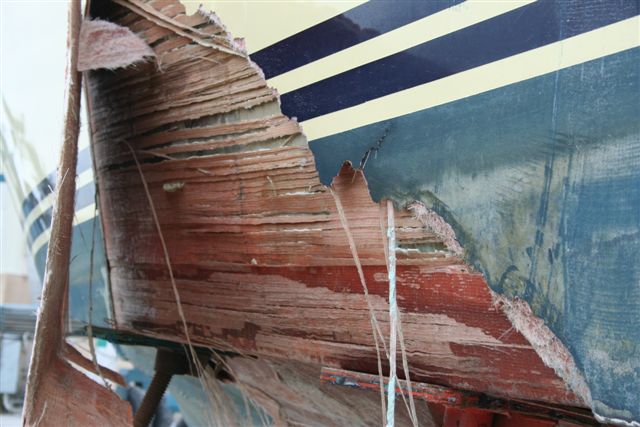 Then we have ply separation between ALL plies and the core. In other words, the whole laminate just failed at every bond. It would take some considerable forensics to figure that one out.

That this happened on the sides and bottom suggests two things. First, bad engineering and probably a structural problem as initiator. Second, faulty laminate engineering combined with an overall failure in the layup process. Precisely what that was I cannot tell, but the overall failure pattern tells me that the laminate simply fell apart under what was probably low stress due to overall weakness.

Next, the core can be seen to be poorly installed. There are very large gaps, as much as a quarter inch between individual core blocks and sections of core sheet. A bonding putty was used and, as usual, we see numerous areas of “never bond”; that is, the putty is not adhering to the core. 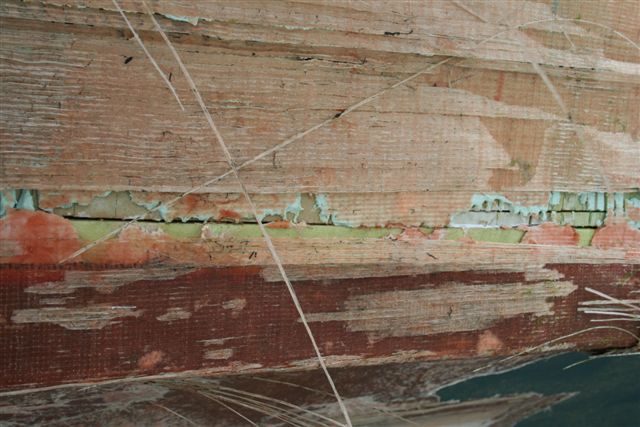 In other photos it can be seen that the skin is disbonded all the way up the hull side to the sheer. This demonstrates both high interlaminar sheer stress and very likely excessive panting of the hull side, a condition usually due to inadequate framing resulting from over-reliance on the core for strength. In other words not enough bulkheads. 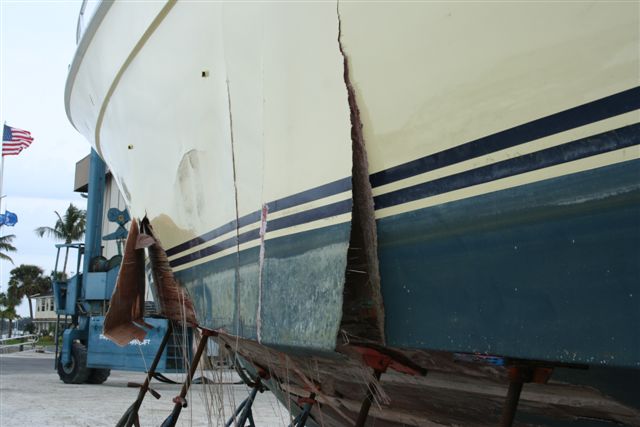 In summary, this case demonstrates why I don’t like so-called “high tech” materials in boat building. In this case, high tech means complicated in order to achieve light weight and speed. Inevitably, this ends up pushing the envelope of sound engineering too far. Why? Because the faster you go, the stronger it needs to be, not lighter and weaker. And that seems to be what happened: cut a few too many corners.

Does this mean that all Bertrams built like this are bad news? Probably not. There is weakness in design and materials plus shoddy workmanship, so it's a bit of a toss up. We’d have to see more than one failure before we could go any further. We’d also need to see the framing system. Too bad for Bertram. This will definitely hurt their reputation. Such events should help keep builders from cutting too many corners in the future. Too many of these failures have been covered and hushed up. I’m glad to see this one get exposed. Overall, that is good for the industry.

This sort of instance is one where you hope your insurance policy covers latent defects. Many insurers have removed this coverage since it covers the builder’s moral hazard, which property insurance should not do. “We don’t care if it falls apart because the owner’s insurance will pay for it.”

"Big Syd", the owner of the boat as he said, posted on Feb-03-09 his comment at a yachtforums.com thread titled "Catastrophic delamination on a new Bertram 63' " page 6:
http://www.yachtforums.com/forums/general-yachting-discussion/10591-catastrophic-delamination-new-bertram-63-a-6.html

The origin of these photos are unknown. With David Pascoe's permission, we have incorporated them for better understanding of the text.  Since around January 20, 2009, these photos have been widely circulated over the Internet forums.

No further comment or response by Bertram Yacht is found on this Bertram 63.