How to Install an Aluminum Fuel Tank

Many people blame aluminum as being a bad material for fuel tanks. Actually, its not. All materials have their strengths and weaknesses, and the problems with aluminum tanks are problems of proper installation, not the material itself. Properly installed, aluminum tanks will usually outlast the life of the boat.

Here's the answer that many of you asked for on how to install an aluminum fuel tank so that it doesn't corrode and leak again. Fuel tanks don't corrode because they get wet; they corrode because at some point something is in contact with the tank that traps water between it and the tank. Like the original foam that it was installed with. Aluminum is self-protecting, so long as the surface gets adequate air exposure. Severe corrosion is always caused by water plus a lack of oxygen. Metalurgically, this is known as "crevice corrosion," and the key is to eliminate all the points (crevices)   that trap water. As long as the aluminum has a good air flow around all surfaces, contact with water will not damage it.

For replacing tanks foamed under the deck, between stringers, or tanks just sitting on a bare plywood deck, you need to build in a new deck. This can be done by thoroughly glassing over good quality plywood, being sure to thoroughly seal the edges of the plywood so it doesn't suck up water. Use mat if you like, but be sure that its completely wetted out, and use two layers for the top surface. Its best to glass the edges in a second operation, after the two surfaces have been done. Wait until the resin kicks off before doing the final roll out.

Note: You may need to add frames under the deck so that it doesn't sag, depending on the amount of the span between stringers. If the tank is more than two feet wide, we'd recommend this. Install the frames before glassing. Also, if it looks like the deck is going to collect water in the center, its a good idea to drill a few 1/2" drain holes, coating them with resin or epoxy so they don't rot.

The best method for mounting the deck  is to fasten heavy, fir ledger strips to the side of the stringers. Make sure the height of the ledge strips is tall enough that they are not going to split. Its probably best to cross bolt through the stringers rather than using screws, if possible. Remember that this has to withstand the weight of the fuel with the boat slamming, so you need to make them strong. Then heavily fiberglass or epoxy the ledger strips (before installing) so they don't rot and set the fully glassed deck on top. Counter sink your deck attachment screw holes about 1/4" and then fill the counter sinks with epoxy or 5200 after the screws are set.

As shown in the illustration below, you are going to set the tank on top of 1/4" strips of plastic about 2" wide and spaced about every 12". Its best to place the strips transversly to the length of the tank. We recommend Haysite or any of the fiber reinforced plastic sheet. The strips should be cut to a length exactly 1/4" shorter than the width of the tank. We don't want the strips sticking out the sides and collecting water.

Next, you will need at least two tubes of 3M 5200 adhesive, and you will literally glue the plastic strips to the bottom of the tank. Apply the adhesive so that the entire surface of the plastic is coated with 5200 and will not leave any gaps or crevices for water to get into. Once the strips are pressed into position, make sure that the ends are equally 1/8' from the edges of the tank. Wipe off the excess 5200 that squeezes out, making sure that the joint between tank and plastic strip is completely sealed. Don't leave any globs of material.

Allow 24 hours for the 5200 to set up before setting the tank in place. Next, apply two 1/4" wide beads (like a stream of tooth paste) of 5200 along the length of each plastic strips that are now glued to the bottom of the tank. The strips do not get fully bedded because tanks expand and contract as they are filled and emptied. If the bottom distorts, we want the plastic strips to loosen from the deck, not the bottom of the tank. If the later happened, we'd be back to our crevice problems again. So we want just enough 5200 on the bottom of the strips to create some suction to hold the tank in place.

It will take two people to carefully set the tank straight down into place.  You don't want to have to move or adjust its position once you set it down. Use wood shims on the inside of the stringers if necessary to guide it into the right position, shims that will be removed after its in place. The 5200 is so strong and will create so much suction that you not need any other method of securement. Don't worry that ballooning of the tank will break the seal. The weight of the fuel in the tank will pretty much hold the tank in place.

That's it! Now it won't matter if the tank gets wet because there are no crevices to trap water and cause crevice corrosion. 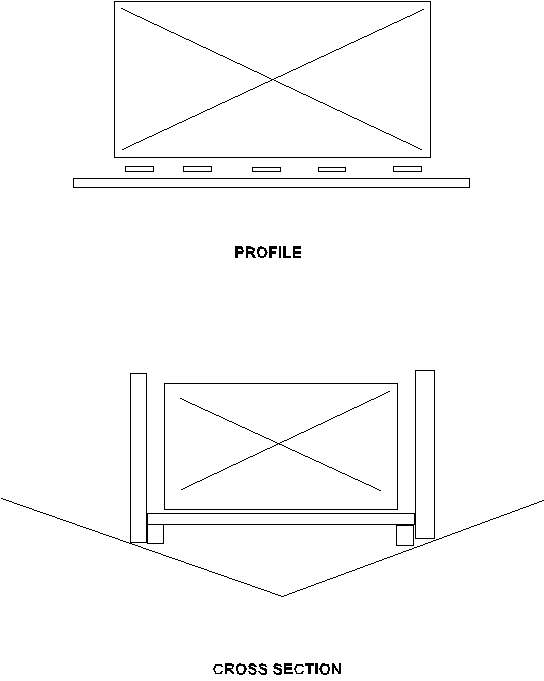 There will be situations where this method will have to be modified. Aluminum tanks are not expensive, so if you need to make modifications to the original shape, be prepared to do so. Just remember that the objective is to avoid creating points that create crevices and trap water. Here are few other points to consider;