Yep, the title here is a play on the "Intel Inside" logo. The difference is that you're much more likely to be dealing with problems of water inside your expensive yacht electronics than you are in the PC you're working with right now. PC's aren't sold to be mounted on the exteriors of boats. These things are. 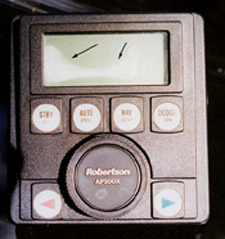 It never ceases to amaze me how many boats I go aboard to find very expensive electronics mounted on a flying bridge, sitting out in the weather, that are full of water. One look at the condensation beneath the LCD display and you know that the thing has leaked and has water inside. Just a couple days ago I was on a three year old boat had a GPS plotter and radar that crapped out due to water inside. Here was around ten grand worth of goodies down the tubes. And yes, they had those little plastic covers on them, plus a cover over the helm panel. But considering that hurricane Irene just dropped 13.5 inches of rain on us, it's hard to expect anything to keep water out of anything that is not billed as water proof. None of this stuff is. "Water resistant," they say. Right, like a drunk resists whiskey.

For quite some time I have been really curious about just how prone to leakage these things are. Well, it just so happened that I was recently able to get my grubby little hands on a couple of power surge damaged year old instruments, so I thought I'd try the ole amateur water test. Put them under the shower head for 30 seconds -- which hardly approximates a Florida cloudburst, yet alone a storm -- and see if they leaked.

My test victims were a Robertson AP300X autopilot control head and a Raytheon Raydata gizmo. Both are flush panel mount types. Water damaged Robertsons are as common as sea gull droppings, so I was particularly curious this one.  Thirty seconds under the shower, no more. Now truly, I did not believe that either one of these would leak under a meager test like this. Especially the Raydata which, if you look at it closely, appears as though it has a really good gasket sealing system. In fact, on opening it up and seeing how it was designed, it was hard to see why it did leak.

The Robertson unit failed my little test miserably and  really filled with water. When taken apart, the water just poured out. As for the Raydata, it had just a few drops inside, but considering it was only a 30 second wetting, even that was far too much. Both these units were about one year old. 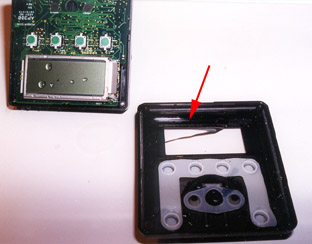 The Robertson unit began to fill up with water. 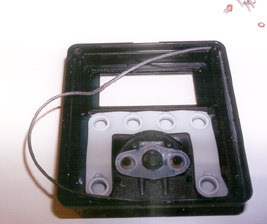 This tiny o-ring could not possibly maintain a seal. The button seals also leaked.

So how did the water get inside? Actually, in a variety of ways. While the Raydata has a well designed gasketing arrangement, the screw holes that hold the cover plate on have no gaskets. The LCD face plate did not leak, nor did the rubbery push buttons. The main problem with and the Robertson unit was first and foremost a flimsy casing that easily distorts when pressure is applied to it. I could twist the Raytheon unit in my hands to the point where the gasket opened up. Now, since there are two long threaded rods on the back for purposes of mounting, it is not hard to imagine what happens when someone tightens the hold down nuts a bit hard. Yep, the casing distorts and bye bye Raydata. Virtually the same with the Robertson.

But the Robertson unit casing had only a 1/16" diameter o-ring that was intended to seal the casing, but did not even come close. I took this unit and plunged it into a bucket of water for ten seconds and it filled about 20% full of water. It leaked that badly. 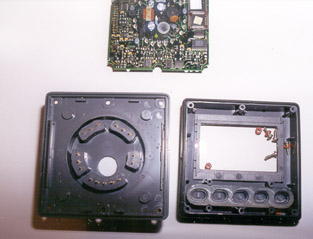 While the Raytheon unit had a much better design, it still leaked a few drops of water. 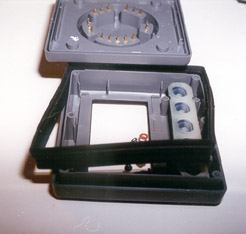 The casing gasket is very large and looks like it should do the job. The ater got in through unsealed screws holding the cover on.

Then I took both units and put them out in the sun on a nice cool day here (85 degrees) and measured the casing temperature and dimensions with a micrometer. This to see what the effects of heat expansion might be on the casings. The Raytheon case went to 134 and the Robertson to 148 degrees. That changed the casing dimensions 0.005 to 0.012", enough distortion to cause leaks.

None of this really surprised me, but what does surprise me is how many people tolerate this sort of thing without holding the manufacturer's feet to the fire. If you are anything like me, one reason is that eventually you get tired of spending huge amounts of your time dealing with the never-ending stream of warranty issues in your life, so you just shrug it off and let it go. Whenever anyone tries to sell me an extended warranty, I usually just laugh at them saying, "Hey, it's cheaper to buy a new one than it is to deal with a warranty issue." By the time I'm done investigating, searching for phone numbers, making phone calls, taking the item off the boat, packing, shipping, receiving and putting back on the boat -- heck, I could have bought three of the things for the time and aggravation that I expended to get it repaired. Thanks, but no thanks.

You are probably still thinking, "Yes, but I keep the little cover on, plus the helm cover, so how can water get in there?"

Well, you have to understand the nature of water driven by high winds. It easily is blown under covers  -- or through them -- and then we have our old friend capillary effect which works like a kid with a Coke and a straw. The slightest little crevice will suck up water  like an army in the desert. And a lot of this has to do with sudden changes in temperature which can cause casing distortions or even vacuums on the inside of the unit that will draw water in. Water is funny stuff, and 3/4ths of the earth is covered with it.

Then there is the matter of condensation. If the seals are not air tight, damp air can get inside. When the temperature changes, the water vapor condenses into droplets. Over time, the amount of water condensing inside can accumulate to the point where water damage causes failure.

There are a number of instruments that are particularly vulnerable to water damage. These include chart plotters with exposed data cartridge slots that permit water to go directly into the unit. Others include any type of instrument with track balls. CRT radars, of course, are also particularly vulnerable. Mounting radar displays on exposed bridges is a bad idea. Water will kill them sooner or later.

So what to do about leaky instruments? Beats me. Don't buy them, don't mount them outside, get a money back guarantee that it won't leak and they will pay your costs if it does . . . . . well, there's no happy answer, is there? Especially after you find condensation in the LCD display.

Well, there are a few things you can do that at least will help:

1.      When the unit is installed, make sure that the hold down screws on the back side are only finger tight so that they don't  distort the plastic casing.

2.      Keep the little plastic covers on at all times when not immediately in use.

3.     Use a vinyl, and not fabric, based helm cover. Make sure that it is designed so that water cannot run underneath it. Beware that covers can cause condensation and sweating. It should not fit so tight at the bottom that it cannot breathe.

4.      Rethink your idea about installing $15,000 worth of electronics on an exposed bridge. This is not a good idea unless you can find a way to positively protect them from water.

5.     If you  do see condensation appearing on the inside of the display panel, remove and have it repaired immediately. If you catch it in time, you'll probably be able to save it.

Radars  If you absolutely must mount a radar on a bridge, there are a few things you can do to help minimize the potential for water damage.

1.    Never mount a radar vertically with the display facing up. This almost guarantees that water is going to get inside and few units ever survive this type of mounting for very long, even if it has a top cover.  Sooner or later the cover gets left open and it gets rained on and that's the end of it. At least with a horizontal mount, it has a chance of surviving this almost inevitable accident.

2.    Mounting in an aluminum box with a thick Lucite door with a positively sealing gasket works best. This will work fine if the front faces is vertical, but if you angle it back somewhat so that you have a better viewing angle, this will channel water into the box. Make sure that the door cover is designed so that it will keep water out at whatever angle the unit is mounted. Make sure that there are adequate latches to ensure that the door seals to the gasket.

3.    Pull-out bins -- the type hinged at the bottom and pulling out from the top -- can also work well so long as it is properly designed. The most common problem is that there is no gutter or drip ledge at that top so that water can run right into the cabinet and ruin the unit anyway.

Overhead Electronics Cabinets  Typically made of aluminum and mounted on a pipe frame top, this type of cabinet works also well to keep instruments dry. Unfortunately, these are only easy to install on sport fishing types.