Many of our readers think that we knock Sea Ray too hard. Some ask questions like, "You don't like Sea Rays very much, do you?" Actually, compared to the competition, we like them just fine, albeit with some serious nitpicking.

However, being the largest selling boat builder in the world, and although their boats have a reasonably well-deserved reputation for quality, we've long felt that, for the price, there was plenty of room for improvement. So while we're at it, we'll offer some more suggestions for this example.

Particularly their smaller boats do not carry Bayliner price tags, so that when we come to evaluate them, we don't expect to find bargain boat quality in a boat that doesn't carry that kind of tag. Nor do we expect to find engineering faux pas that boat builders have been making for decades. So, with that in mind, let's see how this popular 25 footer stands the test of time and a little nitpicking.

A little background: This boat was owned by a Palm Beach resident. Not West Palm, but the beach proper. Meaning that this one resided all its life within exclusive luxury, and had received professional care. Yet it still sat outside on a boat lift 12 months per year getting a nice sun tan and still hasn't developed melanoma yet.  The bottom is not painted and looks like new. The caretaker said it had 83 hours on the meter, which we did not find. Overall, the boat continues to hold a shine fairly well.

Overall, it looks good. The cockpit had been kept covered and the upholstery was in good shape except for the upholstered side boards which have a plywood backing and, uh . . . . well, the plywood is sort of disappearing because these things do get wet. The seat cushion bases have plastic bottoms, so apparently they haven't gotten around to eliminating all the plywood yet. 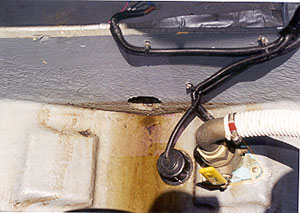 This hole cut into frame leads into fuel tank cavity. Note that plywood is only painted with gel coat. Duct tape can be seen at upper right. 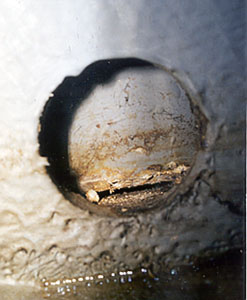 Here's the problem.  The bottom of the fuel tank is clearly visible and it is corroding.

There has been some improvement in the hull-to-deck joint where we did see a wooden backing behind the point where the deck is simply screwed to the hull. Unlike a Bayliner 2655, at least the deck is not riveted on with flower petal rivets! And miracles of miracles, we even saw some signs of caulking around the deck joint. It has stainless hollow oval rub rail banding on a formed plastic rail that has held up well. We'll give three cheers for these blessings.

There is not much bulkheading in this boat. What we see on the inside are mainly partitions, affixed in a manner we could not determine. It has the usual box beamed hull stringers that have generally proved workable, except in some of their larger boats where these compartments have filled up with water due to holes being drilled into the top deck part of the beam-cum-stringer. We didn't see any holes in this one. Though we did see a lot of staples holding wooden parts together.

The fit and finish in the cockpit area is nice and there aren't too many GEICO insurance commercial "We all do dumb things," scripting here. We might question the wisdom of putting a fresh water spigot within a fabric lined stowage compartment, but beyond that the design looks pretty sensible.

The two part engine hatch -- one large and one narrow section -- makes opening it a lot easier than the formerly one big hatch cover that is a real bear to remove. Some kudos here. And maybe a couple more for an engine space that is not cluttered, but with a single engine, why should it be? Add a couple of demerits for steel parts -- like the power trim motors and steel water heater -- mounted flat on the large flat deck sections. These decks flood with water leaks so the steel all turns brown, flaky and funny looking, these parts to ultimately end up on the scrap heap. Adding a couple of riser blocks under these parts would have prevented this.

The boat was reliably equipped with a single Rule 1000 bilge pump, conveniently mounted under the engine where it can easily be reached for servicing. Plenty of pumping capacity, too, in case of emergencies. 1000 GPH translates to 16.6 gallons per minute, if you can believe that. Somehow, we have trouble with that number, but that's what Rule says.

Within the cabin, you'll find the cabin sole 2" above the bilge. Minor problem there if the bilge pump stops working.

Unfortunately, we did find one major fault, one which Sea Ray ought to be shaking in their boots over. It has to do with the aluminum fuel tank, which we found to sitting smack on the bottom of the hull.  At best, there was a 1/4" gap between the bottom of the tank and the bottom of the space it is resting in. With a lot of corrosion appearing on the lower, aft edge, we had no choice but to condemn it. And they're still using duct tape to around the top of the tank to give the appearance of sealing it. Come on, folks. Duct tape?  Is that the best they can do? This is the way you handle a tank full of 71 gallons of gasoline in a family cruiser? Your family or mine?

Fortunately, it looks like the tank can be removed fairly easily to make corrective measures.

Accommodations  There is a large cockpit, so the cabin area ends up painfully small. This is also a trailerable boat with only an 8'6" beam, which really hurts. When you compare designs like this to older designs such as the Chris Craft Catalina 25 express of the 1970's era (with a 9'9" beam), there's no comparison. This boat is low and sleek, so you sacrifice interior space for style. For example, you have to step up into the head compartment, but when you do, you bash your head on the overhead. You'd have to be about 5'4" to stand up and pee in there. Attempting to turn around and sit isn't much better. We also thought that, for the price, they could do better than a portapotty type head unit in there, even though it's plumbed to a mascerator pump.

Overall, the head compartment is a disappointment. So are the strange steps down into the cabin where the first step is not full width, but only half wide. Having spend most of the day on this boat, I still missed that first step at least a half-dozen times. It's made like that because  otherwise you'd have trouble crawling into the aft cave cabin back up under the cockpit.

It has the usual pedestal table that fits between the vee berths that is as useless as elephant wings. Put the table up and it fills most of the space. In discussing lousy ergonomics, it doesn't get any worse than this. The old Chris Crafts seem like palaces by comparison.

The internal fit and finish of the cabin is the usual glued on fabrics in most places. It's not quite as flimsy as you'll find in a Bayliner, but things are still stapled together. You'll find niceties such as stainless steel port holes and a molded galley unit, whereas in the Bayliner it's a flimsy wooden structure that threatens to self-destruct. And usually does. Overall, at least it looks better, in our view.

Performance  The single Mercruiser 5.7 Alpha One produced a top speed of 32.1 MPH on smooth water. The boat does not really get up and go until 3000 RPM where it produced 23.5 MPH, whereas at 2500 it was only 12 MPH, once again proving the inefficiency of stern drives. With stern drives, you need high engine revs to make a boat go. There's a huge dead spot between these engine speeds. Overall handling is good. Not too much propeller torque and not overly sensitive to trim tab inputs. I've still never warmed up to power steering that, in my view, is way too easy; sort of reminds me of a 1972 Cadillac. But at least if you hold the wheel straight, the boat will track straight.

As for the Mercruiser plastic engine controls -- well, we've already said enough about those. Could you imagine controls like that on your car? Ralph Nader would become a billionaire were that the case.

And how about those Mercruiser exhaust risers? As near as we could tell, these had been replaced once already, and were leaking at the gaskets again. The same old story here that never seems to change.

Summing up: On the outside, the overall quality is pretty good. Not much chintzy hardware, and the basic structures are holding up well. With care, it still looks good. The rub rails aren't all loose, dented and falling off, and stress cracking is minimal. As a used boat, it offers excellent value. As a new boat, they're still hard to beat quality wise, but the quality margin over the competition can be a pretty thin line at times.

Originally posted May 30, 2000 at www.docksidereports.com.