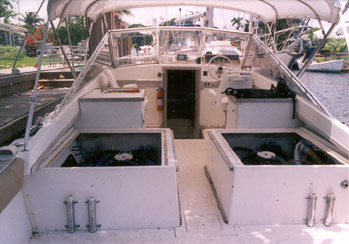 Cockpit is what this boat is all about. All 20 feet of it.

We're going to dip way, way back into ancient history here. Back to the Paleolithic times of good ole 1978. Jimmy Carter was president, and hadn't yet gotten around to trying to save the world from itself. The nation was getting around to the reality of paying for the Vietnam war with astronomical taxes. The economy was a bloody mess, and the Dow Jones was somewhere around 900.

A good P/E ratio was something like 12, if you can imagine that. Even more incredible, people bought stocks because they paid dividends, whatever those are.

Even so, somehow, some way, despite those debilitating and depressing conditions, some boat builders managed to build good boats. In fact, a lot of them did. But before I go any further, let me first state that I'm not really pushing this boat as an oldie but goodie. Design-wise, or in terms of layout, many later-day-saints do a whole lot better in terms of providing bodily comfort and designer style. But there's one thing this boat has in spades, and that is an incredibly good ride under choppy water conditions.

This hull can best be described as being like a cigarette style boat that has been cut lengthwise, right down the middle, from stern to almost all the way to the bow. And then, what they did, leaving the bow section uncut, was to spread the stern halves of the hull apart about two feet. Then they filled in the missing parts in the middle where the keel used to be and, viola! Cigarette boat performance with a nice roomy cockpit.

In other words, this boat is shaped -- on the plan view -- like an arrowhead. Looking down on the boat from above, it looks like a wedge. This gives it an incredible 26 degree dead rise with a very fine entry that was the smoothest riding boat I've been on in years. Even the later model Blackfins won't run with this aged model. In a very short, two-foot, tide rip chop, honking along at 28 knots we hardly even noticed the chop. 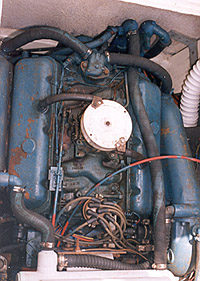 Our client had fully expected to have to replace these tired-looking old Crusaders. He was pleasantly surprised when the compression test and performance showed them to be in good condition.

Powered with a pair of 350 hp Crusader 454's (original engines, mind you) we zipped along at comfortable cruise of 26.5 at 3000 RPM in a 7500 lb. boat. What? Only 32 knots with 700 hp? Yep, those deep vee hulls create a lot of drag. But more than that, our old Crusader engines were kinda tired, too. Spark plugs had beards on them. Really!

I'll preface this by saying that when I first laid eyes on it, I sort of wrinkled my nose at the sight, for I have seen my share of old, badly maintained boats, and wasn't exactly thrilled at the prospect of surveying another one. The thing was pretty well clapped out, but since the buyer turned out to be a neighbor who was looking for a restoration project, we went at it hammer and tongs.

By the time we were done, we were hesitant to take her out on the ocean, but one look at her bottom after hauling and I decided to throw caution to the wind and head out the Hillsboro Inlet into a nice, rough tide rip to see how she'd do. Abusing a metaphor here, it was like a knife through butter. I know, I know, that's boating magazine B.S., but really, this boat didn't even buck a single wave. Just sliced right through them. I was so amazed that I could hardly contain myself and the client probably thought I'd just metamorphosed into a salesman.

Not only does the deep vee hull account for a great ride, but also the overall balance of the boat. With engines near amidships, she rides remarkably level, not just skipping along with only the after 1/3 of the hull on the water. Balance and trim makes a difference.

How is she built? Well, the stringers at the engines are 18" tall and the entire hull is web framed with nary a crack anywhere. There was no tabbing broken loose anywhere. Pray tell, how did this builder manage to achieve what so many others could not? And back in the pre high tech ge, to boot.

Plywood cored decks were in good shape except where the bow cleats had leaked. Fuel tank had already been replaced at least once because it's foamed in. But the important point here is that nothing was coming apart or otherwise discombobulating.

Ergonomically, the huge cockpit is wonderful and the long cuddy cabin is, um, shall we say, nearly useless? That's because when we talk about the "pointy end," you haven't seen pointy until you've seen this boat. It's very narrow up there, sort of like a Cigarette boat.

So who would want to buy an old tub like this? What's it good for? Fishing, of course, and scuba diving and running around and generally going places fast. It's also a good one for the hearty overnighter types as the cabin is really not that bad, but you do have the usual head between the vee berths deal. 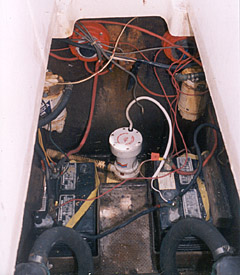 Electrical disasters like this are  common in older boats that have to be cleaned up in order to be made reliable.

If you remove the oversize water tank, there is room for a good sized generator forward of the engines on centerline. And then you put in an air conditioner. The main gripe about the cabin is that it does not have standing headroom. About 5'4" but the vee berths are long and sleepable, albeit claustrophobic for the narrowness.

It has an oversize Bimini top that affords full headroom in the cockpit plus a lot of shade. With two pedestal chairs forward, and a small bar/galley model off to one side. the forward cockpit area is still not crowded. One of the really strong points of this boat is that with four people aboard, there remains great ease of movement with no bottlenecks. And if there is a narrow spot, you know that that's the one place where someone will always, always, be standing, so that you have to make them move in order to pass. Well, not on this boat.

The very low freeboard can be a drawback or a blessing, depending on just how rough of water you want to go out on. In comfortable 5 foot rollers, that bow is going to have a bad tendency to dip down into oncoming waves and scare the snot out of you. In calmer waters, being real close to the water is the blessing to water sports types. You can reach over the side and touch the water with ease.

In short, this is a specialty boat that is ideally suited to the South Florida boating environment, the Keys or fast trips to the Bahamas. As a cocktail cruiser, it's an utter flop.

Our client's question was a pragmatic "Is it worth the effort of restoration?" My answer was an unqualified "yes." In terms of expensive onboard systems, there was nothing. Hence, not much in the way of repair costs. She'll get cleaned, painted, rewired and a bevy of new amenities installed, without the added cost of removing or correcting a bunch of old problems. There wasn't much there to begin with, so there's not much to repair. Ergo, all the time and expense will go into upgrading, not just repairing.

So where will the money go?

Since the old engines are the top quality FWC Crusaders, we recommended that they be rebuilt, not replaced, which will save a bundle. Our client was happy to discover that what he doesn't have to spend for new engines can be spend on some more new goodies, like maybe a pipe frame top.

A paint job. The gel coat, after 22 years in the Florida sun is kaput. Both the hull and weather decks need painting. We recommended a roller application of non skid in the cockpit, which will save $$$.

Rewiring. There's not much there to begin with, so she'll get all new 12 volt system at minimal cost, plus a small AC panel to run a few 125VAC stuff like battery charger and a few service outlets.

The new fuel tank has to come out, and we have to figure out a way to install it right. Not a really big deal here since the entire aft cockpit deck comes out in one piece. Piece of cake or famous last words!

The numbers will actually work out quite well, despite dumping in 30 grand or more. While I can't reveal the purchase price, what he puts into it he can expect to double the resale value with ease. And that's something that doesn't happen much with restoration projects. As with all such projects, the greatest return on investment comes from choosing well built boats that have special characteristics that are highly desirable. Plus there is always the issue of style. All designs eventually go out of fashion, yet for a handful of boats, there remains that indefinable quality of style that keeps people coming back to them. It's the quality that old Bertrams have, but many old Hatterases do not.

And it is this, along with the other features I've described, that makes projects like this so economically practical. It's got that certain same "something" as old Bertrams and SeaCrafts do, and which is why we find so many of them being restored.

For the project minded, this is a good deal, and a lot of fun, too.