When it comes to yacht maintenance, one of the least understood and most overlooked systems that require maintenance, engine and shaft alignment probably heads the list. Here's a short list of the problems associated with incorrect alignment and poor or worn out engine mounts:

These are but a few of the damages that can be caused by basic engine/shaft misalignment. Now comes a discussion of why, unlike in an automotive applications, boat engine drive systems do not indefinetly remain in alignment and need to be periodically checked and realigned. People tend to think of boats and yachts as being rigid structures, but they're not. The fact is that boats bend and twist in all directions, albeit not to any degree that's visually detectable. Expecially fiberglass boats, because they are a thermosetting plastic, can change their shape over time. This can happen either as a result of improper hauling and shoring, or it can happen simply as a factor of age and the effects of gravity.

This type of mount is fine for gas engines but not for heavy diesels. This mount, on a brand new 45 footer, is badly distorted. Note how it is cocked toward the engine and forward. In this case, the mounts allowed the engine to move so much that the shaft coupling came apart.

However, the primary reason why drive systems do not stay in line indefinitely is due to wear and tear on all the components that make up the system. Stress, vibration, friction, slamming and pounding are all factors that contribute the the changing size and shape of all physical objects. Foremost among these are the engine mounts. Remember that it is the engine mounts that carry nearly all of the thrust load of the propeller and transfers it to the hull. Obviously, then, the engine mounts should be well-designed and strong. Unfortunately, more often than not the builder has selected the most inexpensive mounts that he can buy, mounts that are not going to do a very good job of keeping the system in alignment.

In fact, the most commonly used engine mounts for gas and small diesels is a mount that does a very poor job of maintaining alignment. Shown in the photo above, this mount not only permits the engine to rock forward and back, but up and down and laterally also. It literally allows the engine to move like a hobby horse.

A basic rule in engine alignment system is that that larger the vessel, the longer and larger diameter the shaft, the more critical alignment is. That's because any misalignment becomes magnified over the length of the shaft; the longer the shaft, the greater the potential error. A shaft that's centered at the strut bearing can easily be off by several inches with only a change in a degree or two of angle at the engine. This factor is what accounts for why shaft misalignment can cause so much damage on any shafting system of considerable length.

This is also why small boats can get away with a great deal of misaligment, and why they can get away with using cheap, inferiror mounts. A shaft that is only ten feet long can tolerate ten times the amount of misalignment of a shaft that is twenty feet long. But by the time you get up to a fourty-footer with a 15' shaft, the amount of movement and misalignment in the system that it can tolerate without causing damage declines dramatically.

At this point, the thickness and mass of both the shaft, propellor and the drive load all begins to play an increasingly important role. The reason is simply because small diameter shafts are much more elastic than large diameter shafts. All boat shafting systems are self-centering to some degree, but the larger the diameter shaft, the less self-centering it becomes. The shaft does not bend but transfers all that misdirected energy (vibration) to other components such as struts, bearings, transmission and the engine mounts.

How to Check Your System 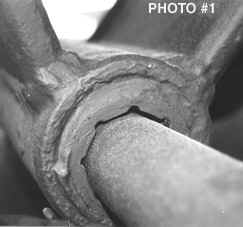 When there is significant misalignment involved, the struts and strut bolts should be checked. To do this, I usually pick a heavy piece of shoring found in most boat yards and give the strut several good whacks. If the strut deflects or shudders, its not stable. If water squirts out from the base, its loose. Also note whether the whole bottom of the hull is defecting when you hit the strut. If so, there's no point in realigning anything unless you first do something to make the strut base stable. If the struts are fluttering because the bottom is weak, the entire system is unstable and must be corrected.

Dial Indicating Shafts Recently a number of articles have appeared in boating publications about dial indicating shafts while in the boat. I'll explain why this should never be done. As noted above, boat hulls can and do change shape over time. Further, the shape of the hull changes when hauled versus afloat. The changing shape of the hull is likely to cause the shaft to bend. Now, you may look at a 1.5" stainless shaft and think that it's cannot be easily bent. In fact, if you suspend it on its ends, even gravity will bend it considerably. Gravity will bend a 15' shaft a lot.

Finally, when you rotate the shaft by pulling on the propeller, you're moving the shaft against the rubber bearing, further throwing your dial indicator readings off. As any trained machinist will tell you, there's only one way to dial a shaft and that is on a calibrated roller bed. One simply cannot dial a rotating object without a reference base and expect accurate results. And a shaft in a boat doesn't provide such a reference.

Only after all the above checks have been made and proven that all else is in order, should one then procede to use the feeler gauges on the coupling. The problem with using feeler gauges is that this measurement can give a false indication that all is well. Particularly smaller shafts can be out of alignment at one end and yet still give a favorable reading at the coupling end. This is because shafts with multiple bearings can bend it into a favorable position while overall it is still badly out of alignment.

Weak Struts This is a very common problem on small to midsize boats. If you want to understand just how important strong struts are, just take a look at the huge struts used on larger Bertrams, Hatteras or Viking yachts. They don't spend all that money on massive struts for no reason. When there are hundreds of thousands of dollars at stake in machinery, the drive support system must be strong.

A futher fact to consider is that the smaller and less the value of the boat is, the less the amount real engineering has gone into its design. The drive system is one area that is often shortchanged.

Take a close look at the strut arm length to strut base ratio. Or, in otherwords, the ratio of the base footprint to the strut length. Also look at the strut width and cross-sectional thickness. In photograph #3, notice how long the strut arm is and how narrow the width is. The arm to width ratio is over 3:1 while the length to base ratio is more that 2:1. The extreme amount of leverage that the arm applies to the base means that it can't possibly hold the shaft steady. It will deflect and allow the shaft and propeller to oscillate. 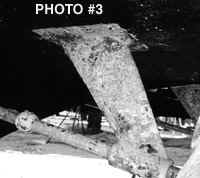 The strut in photo #3 carries the same size shaft and prop as in #2, both on a 40' boat. But the later is double the thickness in both width and cross-sectional area, with a substantiallly wider base. There is no doubt that this strut will hold the shaft steady. Also notice that the length of the strut bore is double the length of that in photo #2.

This strut will hold the shaft very steady, and because of this, correct engine/shaft alignment is much more critical. If its not correctly aligned, something will have to give, and whatever that is is likely to be expensive. The same holds true for shafts with double struts. In fact, a double set of struts will hold a shaft in even closer tolerance. As a general rule, shafts under 1.5" tend to be self-centering because they will bend so some small degree. But shafts larger than this do not take well to bending. They will not bend but work to tear the system apart if not correctly aligned.

Another general rule is that the larger the shaft diameter and the more bearings it has, the more critical are the engine mounts. Unless the mounts are holding in the engine in place and not permitting any movement, there's no point in trying to achieve proper alignment of anything. If the engine moves, no other part of the system will stay in alignment either.

Still another source of engine mount, strut bearing, vibration and shafting problems results from engines that are mounted on weak stringers, or on a hull bottom that is flexing. There are literally thousands of boats that have this problem. During the course of sea trials I frequently encounter engines that are shuddering and bouncing around to such a degree that the entire drive system is being damaged, from engine mounts all the way back to the strut bearings.

Only after checking all of the above points and making sure that all is in order should the transmission to shaft coupling alignment be checked.