Of all the questions we are asked, one of the most frequent is which gas engine is best.
I have some very definite opinions about that because I perform a lot of gas engine surveys, as well as engine failure analysis for insurance companies, meaning that my perspective is not based on the "virtual reality" of dockside chat, but what happens to this vital machinery in the real world based on thousands of surveys. So let's get to it.

Hands down, I give my top award to the Crusader Division of ThermoElectron Corporation for their Crusader line of engines. Coming to this conclusion was easy because their engines simply outperform all others in terms of service life. The fact is that Crusader engines keep going long after others have had overhauls, engine replacements, or replacements of expensive parts such as manifolds, risers and cooling systems, often giving reliable service life in excess of 100% over other engines.

But that's not all. Several years ago, I had the opportunity to tear down a Crusader 454 engine and that of a competitor, side by side on the bench, and make a detailed comparison.* I was quite surprised to find that even the engine blocks were not the same, for the Crusader block was considerably better. 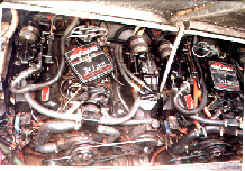 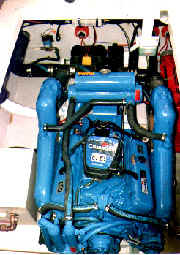 If you don't think engines and how they are installed make a difference, compare these two.
On left a pair of Mercruiser 454's installed in a Forumula F-29; on right Crusader 454's in a Tiara 3100. Any guesses as to the difference in maintenance costs? The striking things about the Crusaders is how uncluttered they are. How would you like to change plugs and oil filters on the Mercs?

Start with the fact that the Crusader had 4-bolt, stepped and stabilized main bearing caps, whereas the other engine had a 2-bolt, unstepped, unstabilized main bearing caps. As some of you may know, GM has long made two lines of basically the same engine, the better of the two being named the "TargetMaster" line of heavier duty, more precision engines for trucks. While I don't claim to be intimate with the GM product line of engines - the last time I personally rebuilt a TargetMaster was 10 years ago - there isn't any doubt in my mind that Crusader is using the TargetMaster line. The basic block was an all-around better block than it's competitor's. The basic differences were in the lower end, as well as obviously larger cooling passages.

Crusader's engines aren't widely used for race boat engine conversions like its competitors engines are, probably because Crusader doesn't get involved with the racing crowd. But it is interesting to note that when its competitor's engines are used by the race engine builders, they always add stabilizers to the main bearing caps. Sort of makes you wonder why they don't just use the better block in the first place, doesn't it? Well, part of the answer is that this is a high performance, not a heavy duty block, made for speed but not endurance.

Why not electronic ignitions and EFI fuel systems?  Quite simply because of cost and reliability. Crusader has strictly avoided electronic systems, and rightly so because let's face it, these engines get wet.  Whether its leaking decks or hatches, stuffing boxes throwing water or leaking hoses or whatnot, reliability goes out the hatch when sensitive systems are involved. Experience people know that the outstanding virtue is ruggedness and the ability to survive the environment. So, too, ease and cost of servicing. In that regard, you just can't beat the plain old carburetor and standard ignition system. All decent mechanics (and many boat owners) know how to fix these things, and at reasonable cost.  When you start adding digital electronics and delicate metering systems, the cost can only go up, and the number of mechanics who work on them goes down. No matter how much fuel a sophisticated system may save, or improvements in efficiency or power, nothing compares to reliability and low cost repairs. Its your money, take your choice.

In the real world, Crusader outperforms all others in terms of reliability and longevity. Its not unusual for me to find Crusader engines 15-20 years old that are still going strong in the seawater environment, whereas its rather rare to find other engines going this long. There are two primary reasons for this: (1) better cooling system design, and (2) better gaskets.

One engine marinizer has had gasket and cooling system problems for going on two decades now and still displays no willingness to resolve the problem. Frankly, there's no excuse for a line of engines in which the head gaskets go bad in 4-6 years, but in 50% of all engines that I survey of this builder, I find leaking head gaskets. Mostly on seawater cooled engines, but not infrequently on FWC engines as well. And both of Crusader's main competitors have exhaust risers that are almost guaranteed to go bad in seawater use within 3-5 years. Its bad enough to have to bear the cost of replacing leaking risers, but the real problem with leaking risers is that when they corrode and start leaking, the water goes into the engine, often causing major damage and costly repairs.

Crusader solves this problem by including the cast iron risers on the fresh water side of the cooling system, so that without sea water going through them these risers can last ten years or more. Yes, it does mean that Crusader engines are more sensitive to overheating because more of the very hot exhaust system is being cooled by the FWC side of the system. But that's a small price to pay to avoid having to replace $2,000 worth of castings and risking major engine damage. This doesn't mean that Crusader engines are prone to overheating, at least not if you pay more attention to cooling system maintenance. This is because any reduction in heat transfer ability will result in a more rapid rise in temperature simply because more of the engine is being cooled by the FWC system.

That means following instructions when mixing your engine coolant with water to get the proper ratio. Did you know that too much coolant (antifreeze) can actually be harmful to your engine? Excessive amounts of ethylene glycol can cause the chemical to gel on the sides of the cooling passages in hot spots like the water jackets around the cylinders and exhaust manifolds. When this happens, the antifreeze begins to retard heat transfer, and what you get is uneven cooling - hotspots and cooler spots - resulting in great differences in temperatures that can cause the block to distort. This is one of the major causes of cracked blocks, manifolds and cylinder heads, as well as ring wear and piston melting. The same thing happens when you have too little, or no coolant; corrosion within the cooling system retards heat transfer and results in hot spots or higher internal temperatures. 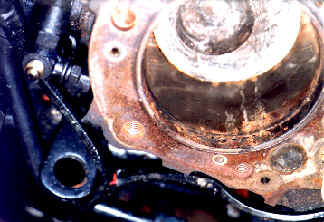 Here's what happens when poor quality head gaskets leak - water in the cylinder,  but that's not all.  The water corrodes the metal surfaces of both the block and cylinder head, meaning that the surface is no longer flat and will not make a seal with new gaskets unless these mating surfaces are re-milled.  You can mill the heads, but you can't re-mill the block. So what you end up with is basically a  ruined engine.  For another $100 in better quality gaskets, this would have been prevented. This inexpensive (Hino) diesel was only 5 years old and obviously had automotive gaskets.

Other features with Crusader include better location of components for servicing, better engine mounts, higher quality transmission oil cooler with convenient front engine mount so that its easy to check for leaks. And unlike some builders, their engines aren't painted black but a nice medium blue color so that you can identify and repair leaks quickly, whereas with black or dark gray you usually don't notice water or oil leaks until its too late. Better internal gasketing. Fuel pumps that almost never fail. Superior belt drive system of peripherals such as water pumps and alternators. A standard mechanical electrical system with no microprocessors or other high tech BS to cause high tech headaches. A serviceable heat exchanger tank with removable end plates so that the core can be removed and cleaned, whereas most others are very expensive throwaways. And yes, you should pull the cores and have them cleaned every two years, as well as regasketing the system.

Now here's one of the best features: high rear engine oil filter mounts on most models!!! Yep, not under the engine where it can't be reached, but nice and high where with two hands you can spin those little honeys off in a heartbeat. Now that's what I call thoughtfulness. (Not included on V-6 models and optional on most engines and available as a kit)

I give my 4 gold star award to Crusader Engines for an overall superior product. Here's a manufacturer that obviously cares about their customers. How do I know this? Because they have gone the extra mile of taking the time to design these engines, not only for longevity, but for ease of service. In an age when most manufacturers could care less if servicing their products are a nightmare, Crusader offers a product that is about as easy to maintain as possible. Crusader costs more, but anything else is penny-wise and pound-foolish.

** Before replacement of major components such as risers, manifolds, heat exchangers, is required. These estimates are based upon real world surveys and experience of boats in south Florida that get full 12 month usage with no layup periods.