And How Money Grows Wings

Over the last few months we've had a run of surveys in which major engine performance problems were encountered. You're probably aware by now that the notion that the typical high powered diesel engine runs for thousands of hours without major cash infusions is a myth. That's not to say that it's not possible, with great care backed up by knowledgeable ownership, a pair of performance engines can deliver 2000 hours or so of reliable performance. It's just that in real life this doesn't happen too often.

For the problem is that all too frequently boat owners are not diesel experts, and their lack of knowledge often leads them down the path of a number of wrong decisions that end up costing big dollars. The problems I'm referring to are not merely a matter of wear and tear, but problems of performance, maintenance and money. A few examples here will illustrate.

We ran into three cases, back-to-back, where the boat's engines and propellering were not set up properly. Whether the owners had attempted to squeeze more speed from the engines by overtuning or playing around with propeller size, we're not sure. But in all three cases the boats were found with oversize propellers that had a tremendously detrimental effect on the present condition of the engines. To make a long story short, the engines were overloaded and this overloading ultimately caused the demise of the engines prematurely. By prematurely, we're talking less than 1,000 hours, and in one case under 700 hours.

Diesel engines are designed to operate at an optimal speed. In order to achieve that speed a boat's propellers have to allow the engine to operate at that speed at wide open throttle. In these cases, the engines did not turn up to their rated RPM,  the result of the propellers being the wrong size. This caused the engines to run slower and become overloaded. Overloading causes incomplete combustion that, in turn, causes excessive carbon build up (among other problems) that leads to premature wear and ultimate failure.

Just to give you an idea of how acute this situation can be, one of our boats actually had two different types of propellers on it. Apparently the owner couldn't afford to buy new ones, so he found two used props that were the same size, but had different blade configurations. This caused one of the two engines to become even more overloaded than  the other. When the engine survey was completed, the aforementioned engine had about 3 times the amount of wear as the other. It was ready for an overhaul.

Speed, speed, speed. Everyone wants to go faster. But let me tell you, folks, that there can be an horrendous price to be paid in the quest for a couple more knots. In all three cases, the propeller sizing had been changed from what the builder had originally supplied. This was not done because the boat was initially a poor performer, for all three were plenty fast. No, it was done in the quest to squeeze yet a few more knots of speed for its own sake.

The boat in the above example was a 38' Hatteras with 6-71TIB's initially rated at 456 HP. That's a lot of power to squeeze out that engine, but to increase propeller size was to add insult to injury. The engines wore out prematurely and apparently the owner could not afford to get the overhauls done by an experienced, reputable engine company, so he went with one of the numerous mobile services that operate out of a rented garage somewhere. The owner probably got a really great price for the overhaul job, but in return for a low price he had to sacrifice something. Something like expertise of the repairer because the survey revealed a number of deficiencies that no reputable repair company would allowed to happen.

In two cases, the overloading apparently wrecked the turbochargers. Instead of replacing them with new ones, they went to the used market and found a pair of turbos that were not the right ones. In another case, the entire induction system was altered in such a way as this increased the overloading problem even further.

Thus, in three boats, surveyed back-to-back, we had cases that started out with tinkering to achieve more speed that ended up engines needing major overhauls not once, but twice in ten years, for each of these boats was that age or less. What each of these boats and their engines displayed was a case of snowballing effects that were the  result of the need for speed combined with budgets that could not afford, or refused to pay, the cost of getting expert, professional engine service and advice. All three cases appear to have started out with diddling with propeller size, and ending up with shade tree mechanics performing substandard overhauls.

In all three cases the engines during sea trial failed to turn up to rated RPM by as much as 35%. In the quest to make the boats go faster, not only did they end up going MUCH SLOWER, but were now looking at repair costs that literally stunned the sellers when confronted with the numbers. In the case of our 38' Hatteras, we were looking at as much as $28,000 to correct the results of the effort to make the boat go faster. In the case of a 50 footer, the amount was $40,000. For a 72 footer, $60,000. 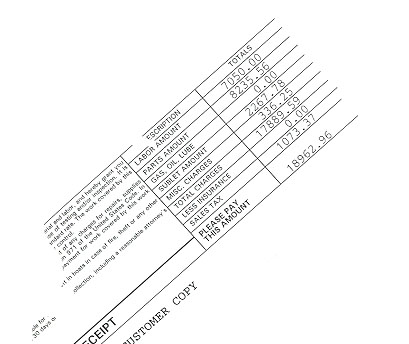 It happens too often that once the boat owner embarks on this road, the problem starts to snowball. It may be (as was probably the case here) that the original owner resolves his problem by selling the boat. The second owner is now faced with an unknown set of problems and in which he repeats the same set of mistakes, first by trying to get the problem resolved on the cheap. Yet another incompetent mechanic gets involved and ends up compounding the problem even further, so that by the time the third potential owner considers buying the boat, the costs of remedying the situation goes beyond the pale. It's a nice boat, but it's got a set of very screwed up engines and no one wants it.

Running on the Edge

Truly expert diesel repairs are very expensive. Labor rates run $60-75/hr. Dealing with high performance diesels requires a high level of both training and experience, for you're not just dealing with complex machinery, but complex machinery that is operating on the edge of its performance limits. This is something that is hard for the layman to grasp, but the fact is that high performance diesel engines are basically souped up industrial engines that were never intended to deliver these kinds of power outputs when the basic engines were originally designed.

It's bad enough that these engines will naturally have a reduced life expectancy, but when combined with inexperienced owners and their attempts to get the job done cheaply, or to squeeze yet even more speed out of them, this becomes a prescription for disaster. Or at least a very expensive affair.

The situations I've described above are becoming all too commonplace as the market develops for faster and faster boats. The situation is not merely getting worse, but rapidly getting worse as we continue to see the introduction of smaller engines putting out ever more power, combined with the ever decreasing average period of boat ownership which, for performance boats, is now somewhere around a mere two years.

We are seeing here a situation where, when machinery wears out prematurely (or so they believe) boat owners are simply putting boats up for sale as a means of resolving the problem. Hoping, of course, that a buyer will come along who doesn't look too closely.

Unquestionably, those in the market for used performance boats now need to be more cautious than ever. Here are some tips to help you stay out of trouble.

Engine surveying requires a great degree of knowledge and skill, along with near constant continuing education. Such knowledge and skill does not come cheaply, which is one of the reasons why people get into so much trouble with discount mechanics.

Having seen the work of numerous engine surveyors, there  do not seem to be  many engine surveyors with the requisite training and experience. My final advice is to hire the very best engine man you can, and be prepared to fly him halfway around the world if necessary. The situations I've outlined above should be more than sufficient inspiration. The cost of paying the surveyors is nothing compared to the other potential costs you face.

That's the common buyer's dilemma. But don't run from it, negotiate. Why? Because there's a pretty good chance that the next one you look at won't be much different. Plus there's a certain advantage for you here. Such as starting out with fresh engines, which is nothing to turn your nose from. Oh, I know, you don't want to go through all that hassle, and then having to wait for overhauls to be completed and all the etceteras.

We all want to hop aboard immediately and GO.

But it's well worth walking this extra mile. All you need is to get the numbers to work out. Meaning: original offer minus overhaul costs equals newly negotiated price = a good deal. If you can make that work, chances are you'll end up WAY ahead of what you'll get with the next boats you look at. For the next one may turn up an okay survey on a pair of engines that are half-way to perdition. And chances are that you'll end up being the one stuck with the big bill.

Does that make sense to you?