Do you see anything wrong with the design of the boat pictured below? In reality, it is a personal injury lawyer's dream. Can you see why? If not, don't feel bad because the design faults of this boat are the sort of thing that only experienced boaters are usually able to discern. Unfortunately, boating novices usually aren't aware of the dangers that a boat designed like an automobile or a space ship can present to themselves and their passengers.  This is a perfect example of what I call an entry level boat because the designers prey on the potential buyer's ignorance, whereas more experienced owners begin to understand why boats should have flat, not round decks.

"Mid Size Power Boats" Chapt. 2
Boat Types: Which is Right for You?

Are you ready for 1959 Cacillac fins? Count the number of places you are likely to slip and fall while attempting to get around on this boat.

It is what I call a bubble boat, the name borrowed from the reference of today's automobile styling frequently referred to as bubble cars. It is indeed unfortunate that some in the marine industry saw fit to borrow this styling from the automotive industry for one very important reason. We don't try to stand up on the outside of bubble cars, but on boats you do have to stand up on the decks. And if those decks are round and slippery . . . well, the potential end result should be pretty obvious, should it not?

Are you beginning to see what's wrong with this design? Can you imagine what would happen, say, if you're trying to dock in a tight slip and suddenly the boat is not going where you want it to and you tell your wife or daughter to run up on the bow deck and try to fend off? To try to negotiate the 4" wide, curved side decks is next to impossible. True, the builder did give you a nice hand rail . . . . located down around your knees (the one below the windshield wings). But even if one did manage to get so far as the bow railing, you are then faced with the prospect of negotiating the rounded foredeck. One wrong step and its . . . . oops . . . possibly one very nasty fall.  Hopefully, the victim won't get tangled up with the propeller as the boat runs over him.

Of course a safer way would be to go through the cabin and up through the bow hatch. But given that it's an emergency where time is of the essence, by the time someone got up there, your bow pulpit is probably stuck through the side of another boat. And even when they do get up there, the poor soul is still faced with the prospect of having no place to stand except on the rounded deck. What is your crew going to have to stand on while having to fend off coming in contact with another vessel? Well, there's nothing there but an 18" triangle of horizontal space. Try standing on a 18" triangle anywhere, yet alone on a moving boat. 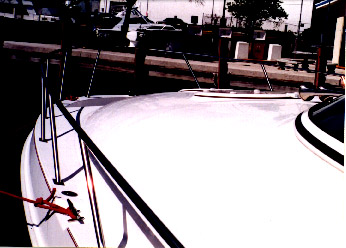 Here's a good perspective of the deck that nearly ended my career.  When your foot slips, your leg is going to go under the railing while your upper body may catapult it self over the railing.  The railing is only 20" high and is utterly useless. Notice that with a catwalk only 6" wide, you have no choice but to step up onto the heavily rounded surface.

True, maybe emergencies won't happen very often, but what about normal docking requirements? Obviously, it is completely unsafe to send someone up to the bow to handle the docklines, as boaters are wont to do. Apparently the crew is just supposed to stand in the cockpit and hope for the best. But what about anchoring? How would you like to go up there when the water is not exactly calm?

This is just one of the important considerations first-time boat buyers need to be aware of. Its the question of racy styling versus safety and practicality. The principle of law is that a boat is not seaworthy if the vessel is not safe, and whether the design of this one is safe is surely open to debate. As one who is frequently involved with litigation, I have no trouble coming to my own conclusions about that: Its just plain dangerous.

Why would a marine surveyor care if you or one of your family members fall and break your leg or neck? For one thing, when the lawsuits start flying, if the surveyor has had any involvement with the vessel (like doing a survey on it), he is very likely to be named in the suit. The lawyer is likely to say, "Mr. Surveyor had an obligation to warn his client of the inherent danger of these curved, slippery decks." I do not like to see this sort of thing for the completely selfish reason that it puts me at risk as well as the passengers.

But that is not the ONLY reason. Another reason is depicted in the other two photos. One is a 30' Chris Craft with a similar bubble deck which caused me to fall in such a way that it could have cost me my life. Trying to get to the bow, I slipped on the curved deck, but what happened next still gives me goose bumps. As I slipped, one of my legs went under the railing while I fell over backwards, off the boat. My leg was levered between the railing and the rub rail and why this didn't break my leg, I'll never know, because it should have. To make matters worse, the boat was on land with a nice twelve foot drop to the ground. But my leg being wedged between rail and gunwale prevented me from falling to the ground. Miraculously not seriously injured, I was able to pull myself back up. 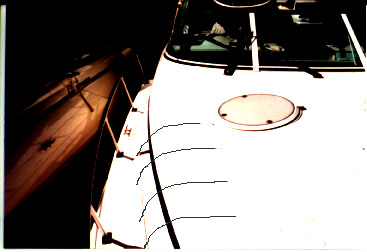 Here's yet another view of a bubble deck. Photographing a white deck in bright sun doesn't work out too well, so I have drawn in the contour lines to show the curvature of the deck of this this boat. With catwalks only 3-4" wide, it forces you step up on the steeply sloping deck with nothing to  hold on to.

While I'm not the sort of person who looks to the courts to right any wrongs against me, had I been seriously injured I wouldn't have hesitated to seek out the most viscous bulldog personal injury lawyer I could find, and several of the all-time greats live right here in my home town.

While I have always been a critic of poor design, mainly because bad design is dangerous, this incident really brought the issue crashing home to me. Remember that I spend my life on boats, was nearly born on one, and am extremely safety conscious; I have to be to avoid being frequently injured. Well aware of the danger of the deck of this boat at the time, and doing my best to NOT slip and fall (realizing that this was possible) it happened anyway because there was no place to stand except on the curved deck.

So whether you're and old salt or a novice, look a little closer before you become smitten with that rocketship styling. A boat is not a spacecraft or an automobile, but a platform that should carry you safely on the water, water that more often than not is rough rather than calm. The designers are selling you gorgeous interior space, but a boat is not a floating cocktail lounge. Think through the functions that not only yourself, but your family members or friends will have to perform like fending off, docking and anchoring. Or what if your child just wanted to go up there for the ride, sat down on the bubble and slipped quietly overboard, unnoticed?

The bulldog lawyers can't restore a loss of life or crippled limbs. And unless we want the government designing our boats for us - like they do with our cars and homes - it is we, the public that needs to force the industry into sensible choices. The best way to prevent this kind of foolishness is to be aware of the danger and simply not buy these dangerous products. Designers design them that way because they know that's what you want. They know its not good for you, but they do it because that's what sells. And if you don't buy into it, believe me, those folks will change their ways faster than they'd change their shoes after stepping in . . . .