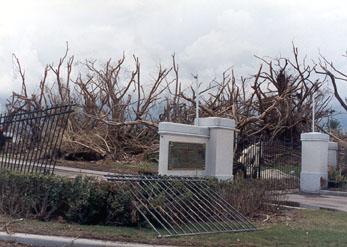 Desolation of the Aftermath - Andrew

It is that time of year again, a time we all really don't want to think much about because it means some extra work for us.

The good news is that if you've been through this drill once before, you've already got the hard part out of the way because you will have already purchased the necessary things you need, will already have your hurricane plan fairly well thought out. If you're an old hand at hurricane preparation, all you've really got to do is make sure the needed equipment hasn't got misplaced, and is readily at hand. Plus reviewing your plan and making any adjustments due to changing circumstances.

If you're a new boat owner, or perhaps have never bothered with making comprehensive preparations, yet alone a plan, perhaps this is the year you should do so. In case you haven't noticed, we have been in a very active period for these destructive storms, and the risks are higher than normal. I've included some photos here that you may find persuasive.

It's axiomatic that if you've never been through a hurricane, it's very hard to appreciate how bad a hurricane can really be. You've seen the pictures of the tornadoes in Oklahoma recently. Well, multiply what you saw there times a hundred or a thousand, and you'll get an idea of what storms like Andrew and Hugo can do. Tornadoes last a few minutes, at best. The duration of hurricanes can last an entire day. 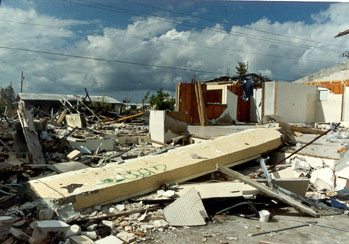 Feel the Power. . . . that's a 12" x 26" steel reinforced concrete header beam in the foreground from remains of this CBS home. The problem with this house was too many windows. The odd thing is the number of boats that survived compared to homes that didn't. 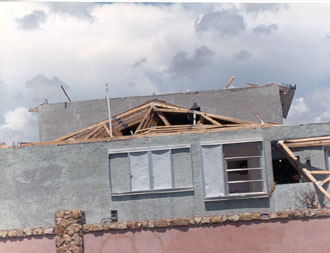 This new home was just nearing completion when Andrew hit. Notice how badly battered the galvanized steel storm shutters are. If you want a roof to stay on, one might suggest not building it with two-by-fours. Kinda stupid building a CBS house with a roof like that.

When it comes to hurricane protection, there are two basic kinds of boat owners. One is the sort who says, "The hell with it, the insurance will take care of it." And then simply abandons the boat to its fate. Our experience has revealed that there are quite a lot of people with this attitude these days. If you are the other sort, the type who wants to make every effort to save his boat, you want to be sure that your boat isn't near a boat owned by that sort. Why is that so? Mainly because the majority of damage caused to boats is the result of one boat breaking loose and causing damage to others. In fact, just one boat breaking loose can wreck three, four,  five or more boats.

I start with this point since, whether you're a novice or a seasoned salt, it's a good idea to review your dockage situation and make an assessment, not only of your marina, but of what kind of people have their boats docked around you. Ask yourself questions like whether you know your dock neighbors, and whether these people are going to take appropriate measures, or will they merely abandon their boats, possibly allowing them to destroy yours.

All good hurricane plans involve consideration of the security of your marina or dock location. And in order to make a good plan, you need to know something about these storms, how they behave, and what their affect will be on your location depending on the direction approach, strength and forward speed. In other words, in order to develop a good plan, you need to educate yourself. If you haven't already done so, now is the time to begin. 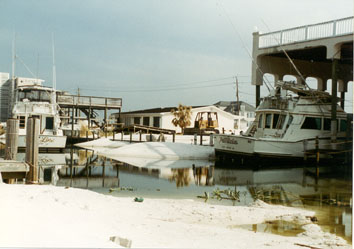 So you'd like a beach front home, huh? Insurance didn't cover the cost of digging this canal out, filled in by storm surge. Opal, 1995. 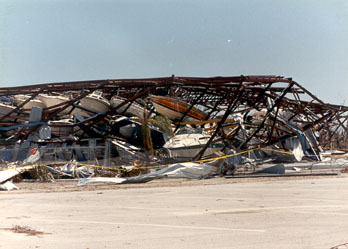 Your boat stands almost no chance in a dry storage building above Category 2. Note how the building was completely denuded of all its steel siding before it toppled over.

After nearly two decades of studying the after effects of hurricanes, I have concluded that it is possible, with knowledge and preparation, that the majority of boats in a strike zone can survive a hurricane with minimal damage. In fact, around 50% of all the boats in the way of hurricane Andrew survived. Now that was a storm with sustained 160 mph winds and  microbursts up to 200. So destructive was this storm that we are still arguing about its strength to this day, since no instruments survived to prove how high the winds really were.

I have added a couple of photos from my Hurricane Andrew collection showing the devastation to land structures. The point of interest here is that, for the most part, the boats generally fared better than structures. The primary reason is that structures are rigid, while boats are not. Boats have a better chance of surviving than many people might think.

The number one factor for survivability is the vulnerability of your marina or dock location. This, more than anything, determines the probability, so let me relate the tale of three marinas, Diner Key, Black Point and Coco Plum. All three of these marinas fell within the eye of Andrew, and all three fronted directly on the coast of Biscayne Bay. However, the astounding lesson learned from these three marinas results from this: nearly all the boats at Diner Key and Black Point were destroyed, while at Coco Plum, not only was not one single boat lost, but no boats even sustained severe damage. Incredible but true.

Was that pure luck? Sort of like in tornadoes where one house is flattened, but the house next door hasn't so much as a shingle lifted? Absolutely not. Coco Plum survived with minimal damage due to several factors that protected the boats from high winds, storm surge, and waves.

The reasons for survival or destruction were these:

In other words, Coco Plum had ALL the necessary features to provide maximum protection, while the features of other two were all working against them. Obviously, marinas that have all the favorable factors are going to be far and few between, but at least my little description here will give you some idea of the things to look for. If your marina or dock location is badly exposed, along with having poor docks and pilings, you must relocate your boat if you want it to survive. Equally obvious is the fact that direct coastal frontages offer the greatest threat, so that you ought to be casting your eyes toward inland refuges unless you just happen to have one of those ideal marinas.

Here are some additional tips:

Perhaps the most important thing I learned from Andrew was that how well the boat owner understood hurricanes was the single most important factor. The area of south Miami where Andrew struck is notable for its lack of good storm refuge. Much of south Dade county is all coral rock, so there are very few man-made canals. However, the fact that a high percentage of the population were Cuban Americans, people who were born and raised in the Caribbean, meant that these people generally had a higher than average understanding of these storms. The application of this knowledge is what accounted for the high survival rate. 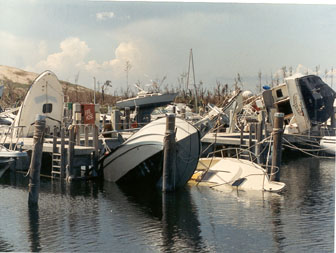 Blackpoint Marina was notable for the complete destruction of nearly all the boats in it. Bad exposure, poor orientation, and  narrow slips with a minimal number of pilings is mainly to blame. 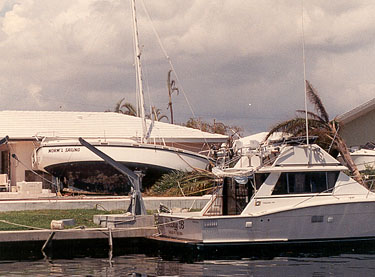 One of my favorites: the name on the side of this sail boat, which nearly ended up in the swimming pool, is "NORM L SAILING". Perhaps normal before the storm, but not after. The lack of dock pilings on this canal was responsible for most of the boat damage. There was nothing substantial to moor too. Otherwise, most of the boats would have survived with little damage.

I attribute that factor as the main reason that 50% of the boats and yachts survived, a number that is quite high considering the devastation that storm produced, and the relative lack of good refuge. Compared to much weaker storms such as Opal, that survival rate is extraordinary, indeed.

The bottom line is that if you want your boat to survive, and are willing to devote a bit of time toward understanding how to achieve survival, you stand a better than 90% probability of success.

Finally, the reason we place so much stress on having a plan and making preparations early has to do with last minute panic. Here in south Florida, we've had a lot of false alarms. In years with weak or only moderately strong storms threatening, there was a lot of complacency, and so you think you know what it's going to be like because no one really panics. Well, let me tell you that when you've got a Category 5 storm bearing down on you, everything changes. An entire city living in fear and on the verge of panic is not a pretty sight, what with all those people out there on the roads and in the stores making last minute preparations. Trust me, you do not want to be one of them.

The time to prepare is now.