As far as ten years back I warned Irwin Jacobs in several published articles about the perils of creating that kind of company with all its eggs in the one basket of the highly cyclical boating biz. All it takes is a major economic downturn, and you are finished. Great business executive, that Mr. Jacobs, as brilliant as all the bankers and real estate moguls, doesn’t understand diversification as a survival strategy.

I also accused him of megalomania when he bought Hatteras and tried to turn it into a mega yacht builder in the face of a market that was already over-saturated with same. He didn’t stand a chance and proved it within only a couple of years, taking a once great company and effectively gutting it. Rubbing salt in the wound, Brunswick then picks up the dregs and foolishly attempts to do something with it. By then the only hope would have been to pack up the molds and blue prints and move Hatteras to Belize or China.

After all, he was the only “boating mogul” I’ve ever met that wore black Armani suits with a hanky in the pocket, in contrast to the likes of Bob Derecktor, Jack Hargrave, Frank Denison,  Dick Bertram and others who wore coveralls or khakis.

Genmar brands consist of Carver, Wellcraft (a brands that should have died two decades ago), Four Winns, Hydro Sports (another looser), Stratos, Champion, Larson, Windsor Craft, Sea Swirl, Marquis, Ranger and Triumph a collection of real winners there. The Jacobs strategy was to pick up failing builders on the cheap and attempt to make something of them. Other than Carver, which didn’t need any help, do you recognize any of those brands? Are any of them worth owning at any price?

The notion of bankruptcy protection is something of a joke if the info contained in several news articles is accurate. According to the articles, Genmar has between ten and fifty million in assets and liabilities of $100 to $500 million with 100 to 199 creditors. What’s this “between” crap? Just that, crap. How does one not know what its liabilities are? Ergo, the truth is probably that Genmar has $10 million in assets and $500 million in liabilities. Now, GM was just disclosed to have a debt to equity ratio of 2:1, but Genmar takes the cake with 50:1. Bankruptcy protection? There isn’t anything to protect. A liquidation recovery of 2 cents on the dollar would be great fortune, but the assets (manufacturing real estate) at this time are likely worth next to nothing.

Brunswick is next in line for the chopping block, an outfit with only a tad more diversification than Genmar, which had none. Their stock is selling at $5 only because a rising tide lifts all boats, even when they can’t sell any boats because the lenders are withdrawing floor plan financing from dealers. Apparently it is surviving due to an existing line of credit, but that can’t last long. Boating won’t much miss Genmar, but Brunswick is a different matter.

Many of the independent builders, so long as they don’t have a big debt load, are hanging in there. They can reduce operations to near zero without going bust, close down even until the field is cleared of excess capacity. However, they’re going to get hit with high fuel prices once again so that in order to continue surviving, they’ll need to change their product line to both cheaper and more efficient boats. One way to do this is to eliminate most of the eye candy and come up with less costly designs. Be done with the Buck Rodgers space ship nonsense and go back to “square is beautiful.” Shallow bottoms, keels and single engines for smaller boats. There will be no choice in the matter what with GM going bust; the end of the V8 and probably V6 is at hand. And no, those Japanese aluminum engines are not adaptable. Don’t be misled if any should try that. We’ve been down that road many times before and it will not work. 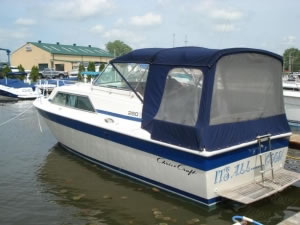 For boating to survive at all, builders will have to adapt to a much poorer America that will be paying either cash or very hefty down strokes, like 30-50%. That means to sell anything in volume, they’ll have to cut the price by half. Sound impossible? Its not. It will just take time for attitudes to change that the boats of the future aren’t going to be like cars with all the eye candy and faux luxury. The boat of the future will be more like a 1980 Chris Craft Catalina pictured above. The American love affair with the automobile is likewise coming to an end; henceforth, the car of the future will be utilitarian by virtue of the fact that people won’t be able to afford anything more.

Why boats like the Catalina? Mainly because they are much less costly to produce. Using computer controlled mold making machines to create that abundance of curvy, wavy lines is very costly. So is screwing around with all the exotic hi tech materials. Boats like the Catalina more closely resemble the traditional summer cottage on the lake rather than a five star floating  hotel room. You get a fold down bunk instead of a queen size berth that comes standard with a $1500 monthly payment.

What the boat building industry needs is some people with vision, who can see what the future holds and then create products that will and can sell in that unfortunate environment. Like the name of the movie, it means going “Back to the Future.” That will only seem bad to people who think things can develop and grow forever. Fortunately, the world is not like that, otherwise we’d consume everything to the point nothing was left. As it is, we’ve already done too much of that. Like it or not, the retrenchment cycle is at hand.

The United Socialist States of America isn’t going to be a very prosperous nation but a nation in permanent decline. Believe it, accept it, and get on with it, or emigrate.